In this section you’ll find comments and reviews written by some of our customers along with descriptions of each custom ski that is being reviewed.

An email from Lucas about his Lunar Strix Model 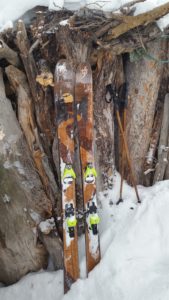 These skis are everything I had hoped and more. Of course the beautiful wood work is in a league of its own, but its the construction that really blew me away. Simply put, they CHARGE in basically all conditions. Considering the size of these skis, they are incredibly light weight in the powder, and exceptionally stable on trail. The shape allows for such versatility, I wouldn’t ever need more than this one pair in my arsenal. My LunarStirx charge in the powder with great flex and float, and charge on the groomed or variable snow pack. They are truly what all mountain skis dream to be. Thanks again Cheers Vin!

About the Lunar Strix: This ski was designed to be a versatile ski for open western bowls and deep powder with dimensions of 185cm and 140/113/126mm. It has a 30 cm rocker tip with slight reverse sidecut mini tail flair, 5 mm camber and side cut underfoot.It has a medium flex and weighs in at 4 lbs 15 oz per ski, which is not all that bad for a ski of this size.

An email from David about his Stress Killer Model 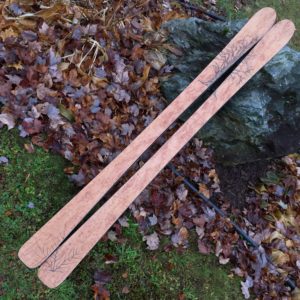 Sorry it’s been so long to get back to you. The season started out slow. We finally got enough cold weather and lake effect to get some good skiing in. I love my skis! It took me awhile to get used to them. Initially they were a bit hooky. A quick tip detune with a gummy stone solved that. Then I discovered that I was skiing a bit too tentatively. These suckers like speed. At slow speed I don’t get them to flex enough. But at sufficient speed I can drive them and get flex. They grip ice unlike any skis I’ve ever had. They also love to turn. They’re exactly what I wanted. More than one person on the lift has asked about them. I tell them a tale about a guy from Roxbury NY now living in the wilds of Vermont lovingly hand crafting skis. You may get some inquiries. Any ways, thanks for a great pair of skis. They’re perfect for skiing the lake effect hard pack of Western New York.

About the Stress KIller: This ski was designed as a front side carver for the east coast. This is traditional shape with traditional camber with dimensions of 180 cm 120/74/110. 17 M radius, 6 mm camber, medium flex with a nice snappy feel. The graphics on these were created using a new technique I discovered this fall using a graphite paper transfer to hand draw directly onto the wood veneer. This works great for intricate and fine work that would be very difficult to do with wood burning.

An email from Chad about his Weasel Monkey model

I have been skiing my new White Room skis for half a season and absolutely love them. Vin was great in using his expertise to design a ski exactly as I described. They eat up the crud, are a dream in powder and can handle everything I’ve thrown at them with ease . Almost forgot to mention how gorgeous they are, the veneer and inlay work came out awesome. Some of my friends were actually asking me if I was really going to use them because they truly are an individual work of art. I’ll be beating on these boards until I can justify having Vin build me another one of a kind set. Keep up the great work.

About the Weasel Monkey: Designed as an all mountain ripper 190cm 131/97/119, 25 cm rocker tip with slight reverse side cut, traditional shape and 6mm camber underfoot with a slight tail flare. These will be a front side destroyer in most conditions. Rosewood background with inlays of abalone shell and figured Anigre. The inlays that were chosen have person significance to their owner.

An email from Tom about his Telemundo model 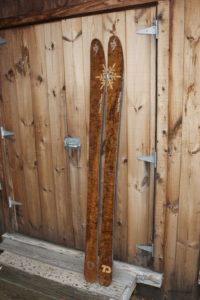 After much anticipation I finally mustered the courage to take the Telemundo’s from objects of art to vehicles of bliss. Not only do they look incredible, but the ride is “wicked sweet”. Being a big burley hunk of a man candy I wondered how the flex would react under power. Once again Vin crushed it! It was only fitting to christen them in 7” of fresh pow! Perfect ending to an incredible process!

About Telemundo: Vitals 184cm, 130/99/116, 5 mm camber, 30 cm rocker tip with slight reverse sidecut, micro-flare tail with a skin notch. 4lbs 8 oz each ski. These will get mounted up for tele. Figured Imbuya with Anigre and abalone shell inlays. These will also get some added silver leaf graphics with significant personal meaning for their owner. Read more about the significance of the images here.

I have skied the wanderers on every kind of crappy snow you can imagine. They handle everything I have presented them with. Today I skied nosedive with icy bumps and 3 inches of wind slab in the troughs. Definitely pushing the limits of tele skiing. I was keeping up with two friends who are level 2 instructors. I always felt in control.

They carve beautiful little turns and arc big GS turns. They are good at figure 11s also but never feel squirley. Thank you for building me what so far appears to be the perfect one ski quiver.

An email from Paul about his Arboreal model: One word: fantastic!!! Some more words: they’re super. I tuned and detuned as suggested and I had a blast. I was a bit concerned about the stiffness (before I got on the hill), but that concern disappeared the moment I started skiing. Very responsive.

I haven’t charged a lot of moguls yet, but I have a lot to learn tele skiing on moguls in any case… I’m real happy. Lots of great compliments on the skis too. Many thanks again. 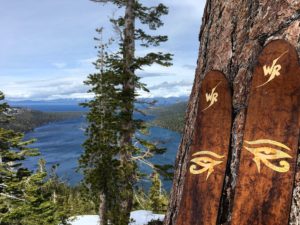 An email from Shelby about his Meingus model: I had a chance to ski the Meingus’ last night at Smuggs with 4 or so inches of fluff on hard groomer below. Freaking sweet. Very nimble and playful when skied right in the pocket/middle of the ski. 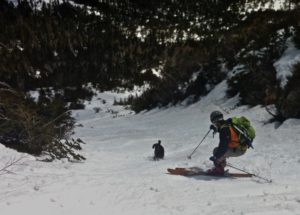 An email from Dalton about his BOSS 318 model: One of the most versatile skis I have been on. Comfortable in any terrain and snow conditions. The design concept lends itself smearing turns and washing the tails as well as holding an edge on fast firm groomers and snapping turns in tight trees. Really a fun ride, does it all well. 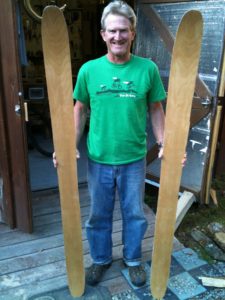 An email from Mike about his T7 model: Toured on my T-7 White Rooms from VT – UT – CO this past winter and they performed splendidly in the back country and at the resort, light enough on the uphill, fat and floaty on the down and always looking pretty.

An email from Margaret about her FUBUKI model: Love them in the woods and bumps.

Even a few inches of powder on the bumps and in the woods the skis were so light and flexible that I was dancing through the bumps w/very little effort. Now let me remind you that’s TELE dancing. They busted through mash potatoes. I CAN’T WAIT for this spring, to try them out in corn. 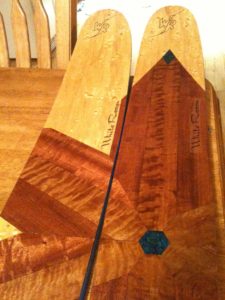 Eric talking about the BIG J Express model: I have gottenLeaf/flake with blue shell inlayssomewhere north of 25 days on my Express’ and they are skiing as well now as they were in Dec. The veneers are a little chipped on the edges, cosmetic only. As I mentioned in December, these boards are the best in my quiver of 6. I’ve pretty much replaced 4 skis with these and the only other ski I’ve taken out more than once was a Stockli slalom ski on bulletproof. The WR’s we built are great at just about everything including bumps (moderate pitch) and speed up to just over 60mph. I ran the WR’s in the Syrovatka downhill race last weekend at Jay and they held up well getting a little squirrelly towards the end but managed 62mph in the practice run 57mph in the actual. I really think you have these boards dialed in well at least for me. The final test will be the upcoming shepards pie of spring… Corn, mashed potatoes, and Ice… Skied everything from ice to deep pow over the last week… Compared the express’ to everything else I own… Hands down your build is the best ski I own. 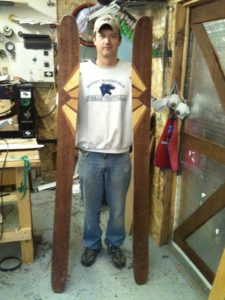 Dave talking about the 183cm BOSS 318 model: 1) They’re awesome! Love ’em. I’ve skied them in all sorts of conditions from icy groomers to scrubby bumps to fresh knee-deep. they are awesome across the board. I was really surprised at how quick they are in the bumps and tight trees. I thought they would be really hard to turn quickly – they are not. THey do require me to ski aggressively – if I get a little loose they definitely have a mind of their own. They are more center mounted then I realized so there is some more tail for me to contend with, however, the “extra” tail lets me lay down some really strong turns on steep stuff when I want to go from headed directly down the fall line to cross hill or even back uphill I can really leverage the back end and not “slide out” at the end of the turn

I have cut G3 alipinist skins for them and have put 3 BC days on them they tour super well with the Marker F12s (a great combo if anyone is curious). The setup is super light. These skis love to float!!! They get on top of the deep stuff fast and really stay up – wicked fun!
One thing I would change is that I would have had you make them stiffer. They are pretty soft and the tips get a little “whippy” and grabby in crud. This is really just a direct result of my request on stiffness. Bases, sidewalls are holding up very well. Topsheet is chipping a bit on the edges of the tips a tails, but seem to be right line with the way my Volkl’s weathered. Nothing serious.

Love ’em Vin! Let me know what specific questions you have and I’ll try to answer them. I will check back in with you after a few more days on them,